I’ve been thinking, particularly for sharing information with others, it may be useful to be able to create ‘compilation documents’ which combine multiple notes into a single file.

I’ve recently started adding interesting snippets of information regarding computing hardware to my network. A tech-y friend of mine may express some interest. It would be very nice if I were able to generate a single combined file I could export to a PDF and send them.

Take some minimal example network of notes. A query is performed on a particular vertex.
A DFS is then performed alphabetically (just some order) according to the query, and a resultant combined file generated. This could be placed in a sub directory, or a tmp file. It would be opened immediately after creation.

Let’s have this as the sample graph, with the vertices/letters being notes, and the colours representing tags. 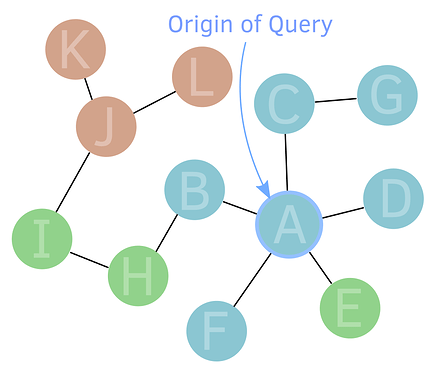 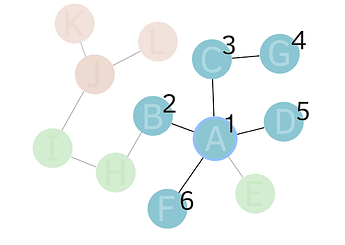 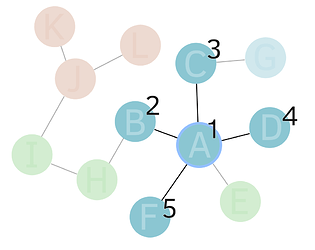 All blue and green notes 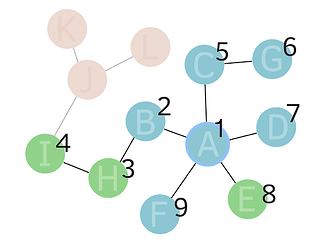 Let’s make this extra-fancy and have two query ‘source’ notes — A and J.

Brown, and connected green up to depth 1 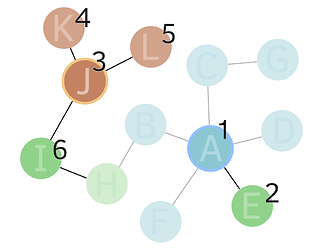 Currently, I just have this idea. I certainly don’t have the time to implement it in the near future.

To prompt conversation though, I thought I may as well put the idea together and share it.
If someone else is interested enough to try to whip up a prototype, that would be lovely

I thought about that at one point, but then thought it seems like needless complexity.

We can, after all, manually construct that sort of structure; either with “structure notes,” or with org #+INCLUDE. And transclusion, if done right, could enhance that.

If we did have a feature like that, could also be used to auto-construct structure notes; where instead of putting in the content, put in the links, as a kind of starting point. That may or may not be a good idea though.

It sounds like simply having an easy way to query could achieve this then, using #+INCLUDE: – generate any list of notes you want, put them in some arbitrary order, compile a list of #+INCLUDE:. A user could fine tune the included content using standard org options, such as restricting to specific headlines.

We can, after all, manually construct that sort of structure; either with “structure notes,” or with org #+INCLUDE . And transclusion, if done right, could enhance that.

Oh, I’m not suggesting that we do anything complex, I just don’t want to manually enumerate through all the files and #+INCLUDE each one.

Off the top of the head, all that’s required is

One particular aspect that needs to be kept in mind is cyclic dependency resolution.
If in your your very first figure, G and D shared an edge, then you’d have a pickle to be resolved on your hands

Sorry for the necro post but I’m looking to do something very similar as to exporting a subset of my complete set of org-roam notes where the content also includes org-noter content and the associated PDFs. It looks like this one might have died on the vine but if anyone knows otherwise please do update us.